So far, so good!  At the end of three weeks I have successfully completed at least 20 minutes of mindful meditation every day!  Within that I have also attended a mindfulness class and practiced yoga at least 4 times per week.  I’ve also set up a small accountability group to make sure that I maintain the practice.  So far so good!

What I have learned thus far. 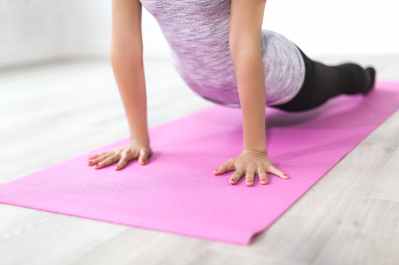 As part of this journey I have come across a couple of really interesting Mindfulness courses.  The first is Positively Mindful which I have been attending at Breathe Bristol yoga studio.  This is an hourly drop in session with a mixture of meditation and self enquiry.  I’ve also started a more formal Mindfulness living course at My Awareness yoga in Montpelier.  So far I’ve only attended one of nine sessions, so I’m interested to see where that journey will take me.  The key thing I have picked up is that this is a journey – one to be taken at a pace that best benefits me.    In my head I look like a super sleek toned yogi – the reality the image is as far removed from that as it is possible to be – however, already I can see that I have made some progress on postures and this gives me hope.

I'm Stephanie, 48 and luckily retired. Having suffered from life limiting ailments for most of my life I am interested in finding alternative methods to health and happiness. I hope to share my findings to other ladies of a certain age to try out. View all posts by poppytoft

This site uses Akismet to reduce spam. Learn how your comment data is processed.

Morning walk in the fitness park. It's normally really busy, but I'm guessing the Portuguese don't go out to exercise in the rain! ☔
Fab Friday morning walk on The Downs with @bristolnordicwalking 🚶‍♀️🚶‍♀️
Tonight I went to see Tchaikovsky by candlelight at Bristol Museum. Sums up what I love about Bristol - there's always something happening, somewhere.
My first attempt at altering a frock!! 👗It's like a logic problem at the end of the day! I just hope it fits!